Many bands have gotten their start in Texas. Not many can touch the number of credits RIVETHEAD has obtained worldwide through film, television, live sports events, radio, podcasts, and social media.

Founding member, Steve Page (ex-SKWEE-G) on vocals, guitars, and keyboards is joined by Sam Grun (ex-With Teeth) on bass and vocals and Mike Lambert (ex-Cull the Heard) on drums.

With 10 albums in its catalog, and an 11th in the works, thousands of fans on social media, a history of radio play on national, satellite, and internet radio, awards, endorsements, game time play by professional sports teams, and much, much, more, RIVETHEAD is busy writing, playing live, and releasing new music videos.

Heavy, grooving, and sometimes melodic metal, laced with the electronic elements of a sci-fi movie soundtrack. If the Blade Runner, Tron, and Mortal Kombat soundtracks were thrown into a musical blender with Metallica, Pantera, Korn, and Fear Factory, you’d get something pretty wicked. It might sound a lot like this. Drawing influences from bands such as Static-X, Powerman5000, White Zombie, NIN, Ministry, and Rammstein, RIVETHEAD has gained international acclaim, winning over audiences both in person and online.

RIVETHEAD has joined forces with Plinian Films and Sock Puppet Parody. The live performance music videos the band has been putting out have all been done by Plinian Films (from “Happy Together” going forward) and more are on the way. To add to that, RIVETHEAD has been recording the music for Sock Puppet Parody, and there are currently loads of new songs loaded up for release. While Steve has done the vocals on quite a few of the tracks, guest singers are being lined up for some of the songs as well. 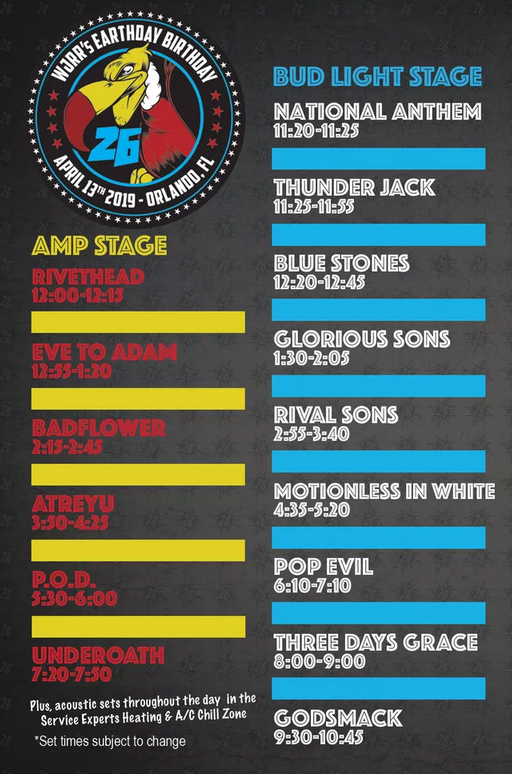 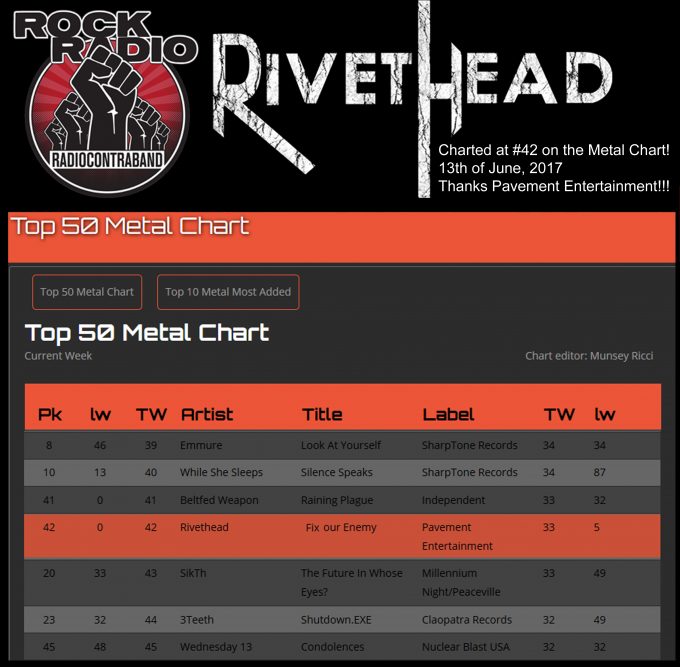 “I have listened to the Rivet Head CD – thank you. Listening to it confirmed my earlier impression – the band is quite outstanding” – Mark Wirtz (Wirtz accepted EMI veteran producer/A&R chief Norrie Paramor’s offer to join EMI Records as in-house producer, working at Abbey Road Studios alongside the Beatles and Pink Floyd)

Exposure from terrestrial, satellite, and internet radio play for the band have created lucrative sales online, and those sales continue to grow in an international basis.

“I have listened to the Rivet Head CD – thank you. Listening to it confirmed my earlier impression – the band is quite outstanding” – Mark Wirtz (Wirtz accepted EMI veteran producer/A&R chief Norrie Paramor’s offer to join EMI Records as in-house producer, working at Abbey Road Studios alongside the Beatles and Pink Floyd)

They symbolize solid rock music decorated by industrial/electro sound. Guitars are heavy, rhythms are groovy and vocals are tough and strong. Even though they incorporate digital sounds into their rock music, they never sound too inorganic.“ – Masa, 21st Century Metal

“Making waves as they make moves on a national level.” – BloodRock Media

“RIVETHEAD knows how to do a CD release party… RIVETHEAD definitely brought the house down. Not only was the band pumped up about their new album, but Curtain Club also honored them by adding them to the band signs hung throughout the venue.” – Examiner.com

“No matter who you are, you’ve most likely heard Rivethead’s sounds, either at a sporting event, on the radio or XM, or at local rock venues … R.H. again proves that the kings of the hill are not ready to step down anytime soon! (MB)” – Lit Monthly

“Drawing the early crowd right up to the stage and proving that everything is bigger in Texas.” – Local Live Magazine

“To cut a long story short: this band convinces me right from the get go. The sound is a dirty hybrid somewhere in between Filter, Static X and Rammstein-light. The result is a inviting, somewhat rallying product which is supported by the Ministery-esque ADHD vocals of singer Steve Page.” – Frank D., Lords of Metal – The Netherlands

“Rivethead is a local Dallas band that has had their fair share of publicity and then some; everything from film, tv, NHL’s Dallas Stars, radio, satellite radio, and more… the band managed to jam pack it with hard hitting tunes and some awesome covers! RH had special guest guitarist Ashes of Wayne Static’s group come up to play Rammstein‘s hit single, “Du Hast”. The crowd, who were jumping about and thrashing throughout the entire set up to this point, went into mosh mode and showed how crazy they were willing to get.” – Mark Ambrose, Show Review: Wayne Static feat. Rivethead

“Rivethead is an extraordinary combination of old industrial metal with Static X and Ministry… kinda special and complex. From a brutal sound like… and then continues with aggressive riffs combined with electronic elements.” – Malice, Metal Act – Romania

“These guys deliver exactly what you signed up for – rivethead music for rivethead people. Really well put together in all departments from the mesh of the drums and electronics to the guitars and the vocals.” – Martin Adkins, Review by Martin Adkins on Broadjam.com

RIVETHEAD/Self Titled (Self Released) This was a good example of modern metal played well…and if this band can’t get signed, then these labels need to wake up and smell the coffee.” – Metal Core Fanzine

“ For the fanatics of the gender I am for sure it is a killer disk, to jumping!!” – Metal Radika

“They were clearly deserving of the headline spot at this main stage, commanding the largest crowd yet as everyone cut loose to their brand of metal, giving every song an incredibly thick tone…” – Jordan Buford, The Music Enthusiast

“This veteran band has refined their sound over the course of the last few years, and comes …with tremendous momentum. The band is able to insert tremendously catchy hooks deep in the psyche of anyone listening in.” – NetFur

“Arguably the equal of any other record written and produced by the Dallas metal scene since Pantera imploded. Rivethead’s aggressive-yet-beautiful brand of industrial metal is impressive. And their diversity of musical styles –while always remaining true to their heavy metal roots– hopefully ensures that the band’s distinctive sound will never get stale and predictable.” – Todd Maternowski, Pegasus News – Dallas, TX

“If you’re into Static-X – heavy drums, pounding guitar and intense lyrics – you need to familiarize yourself with RivetHead.” – PennsEyeView

“Absolutely grinding, ride-the-riff industrial coming from Texas. Just the way I like it. Groove intense, melody heavy. Nothing wrong with some metal that you can shake your ass to.” – The Ripple Effect

“energy was through the roof” – SFL On Stage

“Rivethead plays LOUD ‘n’ HEAVY music that is quite intense in texture but highly diverse in substance. No question about it that this band and this record is in the metal category but Rivethead seems to have a unique presence.” – Skope Magazine

“I love this band. The music is so cutting edge and right where it needs to be for the taste of the industry right now.” – Vix, Sugarbuzz Magazine

“Then it was off to the Amp stage for Rivet Head a 3 piece band… that must have been a well known local as every one in the front knew the songs.” – localmusiciansmedia.com

“I also would like to give special credit for the production and the artwork of this album. ‘Rivethead’ is a self financed album, but it looks and sounds like a major release, and for this the band gets some extra points.” – Eigen beheer, http://www.lordsofmetal.nl

“RIVETHEAD a Dallas based heavy metal/industrial band, shines through all of the above.” – Joe, Rockeyez

RIVETHEAD played Earthday Birthday on April 13th, 2019 on the 2nd of 4 stages, with bands including Atreyu, Underoath, POD, and more, with the main stage seeing Godsmack and Three Days Grace as headliners.

Dallas Stars – several songs over several years. “Difference” was the team’s powerplay song for a season.